What are quantum communications, and what implications will this new technology have for information security?

Quantum technologies are new disruptive technologies in which fundamental aspects of quantum physics are instrumental in providing advantages over the conventional technology counterparts. Examples include quantum computing, sensing, imaging and communications.

Professor Tim Spiller will briefly outline examples and illustrate their "quantum advantage", before discussing quantum communications in more detail. He'll give a short overview of what is being pursued in the UK National Quantum Technologies Programme, and then expand on the technologies being delivered by the Quantum Communications Hub.

This talk will be followed by a Q&A session. 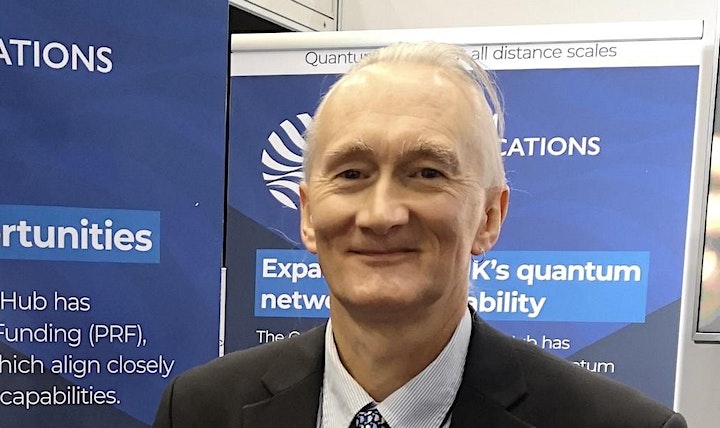 Prior to this he was at the University of Leeds in the roles of Head of the Quantum Information Group and Director of Research for the School of Physics and Astronomy.

Prior to 2009, Professor Spiller was Director of Quantum Information Processing (QIP) Research at HP Labs Bristol – an activity that he established in 1995 – and a Hewlett-Packard Distinguished Scientist.

He has spent around 40 years researching quantum theory, superconducting systems and quantum hardware and technologies and has published extensively across this spectrum.

He led HP’s strategy on the commercialisation of QIP research, is an inventor on 25 patents linked to quantum technologies and applications, and was additionally a consultant inside HP on networking, communications and nanotechnology.

This event is part of the 2021-2022 season of free public lectures for people with an interest in science. The events are organised by Portsmouth and District Physical Society in partnership with the School of Mathematics and Physics at the University of Portsmouth.

If you have any questions please contact the organiser:

Chair of the Portsmouth of Portsmouth & District Physical Society and University of Portsmouth Physics public talk committee, and Reader in the School of Mathematics and Physics.